HOW RISING MORTGAGE RATES ARE IMPACTING THE HOME-BUILDING INDUSTRY

Changes in the economy are having a big effect on the building industry. Inflation is at a 41-year high, and as a result, the Federal Reserve is trying to slow it down by raising short-term interest rates. In March, they raised interest rates by 25 basis points. (One basis point is 1/100th of one percent, or 0.01%). Then, in May, the Federal Reserve increased them again, this time by 50 basis points - the largest single increase since 2000.

As a result, mortgage rates have also increased - but they’ve gone up over 100 basis points. The relationship between the Fed's interest rate increases and the mortgage rate increases is only indirectly tied. If the first goes up, the second goes up — but it’s impossible to infer the timing or extent of the increase in mortgage rates. The spike in mortgage rates, of course, has an impact on how much people can pay for houses. Suppose someone was looking to buy a $450,000 house at 3% interest rate, and that was the highest they could go and remain able to cover the payments. If interest rates go from 3% to 4%, the same monthly payment for that buyer means they can now buy a $400,000 house, instead of $450,000. At a 5% interest rate, they can afford a $350,000 house. A 1% change in interest rates means a 13.2% increase in home prices.

The Fed has announced they may do more rate increases this year, but there are no guarantees that they will. If the economy starts to slow, they may not need to increase rates further.

Of particular relevance to builders is the fact that, even with 5% interest rates, there’s still strong housing demand. However, that demand is concentrated in a smaller segment of the population — those who are less sensitive to increased mortgage rates.

In this housing market — with high house prices and increasing mortgage rates — how are homebuyers and builders responding?

WINNERS IN THE HOUSING MARKET: INVESTORS AND WEALTH BUYERS

Some house shoppers are very sensitive to increased mortgage rates. Others aren’t — because other factors are driving their purchase. And the gulf between winners and losers in the housing market has grown.

For example, higher house prices and higher mortgage rates are less likely to deter investors and those buying based on their wealth (rather than on their income). Although the S&P 500 has come down from recent highs, it’s still up almost 90% over the past 5 years. And if someone already owns a home, they’ve likely seen a large gain in equity over the past year. Increasing interest rates may even currently be motivating these buyers, because they want to lock in rates now, before they go any higher. If they can afford the payments now, they can buy now and refinance later. 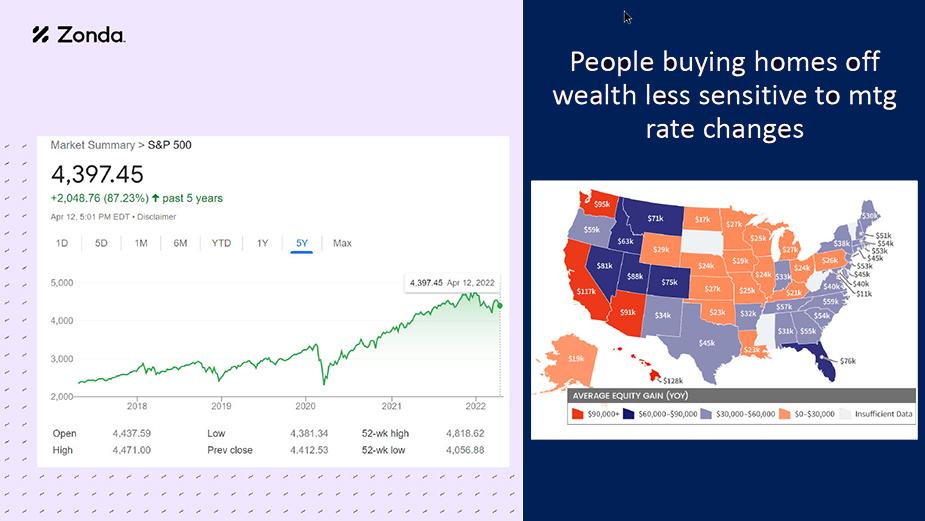 A buyer who has equity to tap into and who is moving into a cheaper market is much less sensitive to mortgage rate increases than buyers who are selling and buying in the same market and/or don’t have equity.

This market is incredibly difficult for first-time buyers. They don’t have equity to tap into, and so they’re more vulnerable to higher home prices and mortgage rate increases.

As home prices continue to rise, and supply continues not to meet demand, many people are getting priced out of the market. If the Fed continues to raise interest rates, it will likely mean more people are priced out. 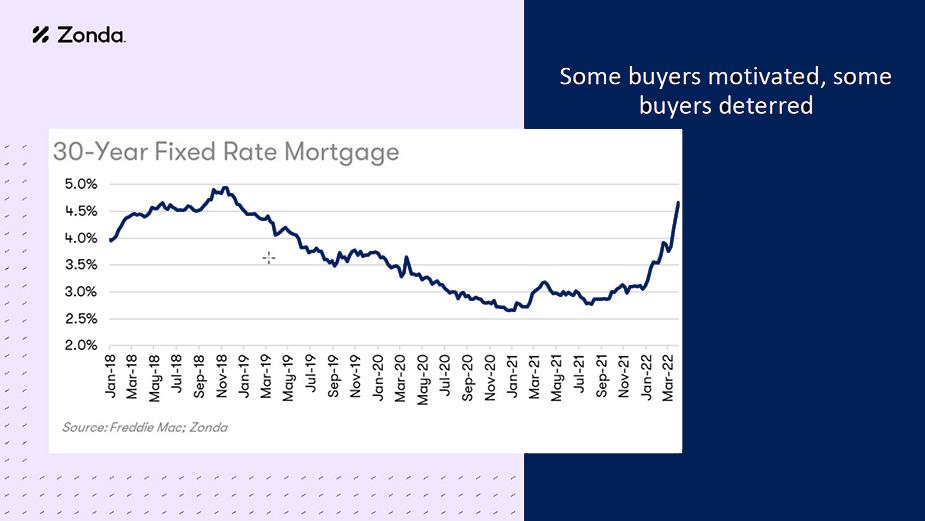 In contrast with investors, homeowners who plan to live in their homes are exposed to more risk when trying to time the market. They may have planned to sell their home and wait for the market to drop before they buy — but interest rates and house prices continue to climb, as do rents.

As a result of higher mortgage rates, builders are seeing hesitancy from some buyers. Pre-qualified buyers are also no longer qualifying, and some buyers aren’t getting qualified in the first place because of higher interest rates. In Zonda’s surveys, builders are saying things like “Demand is good, but we’re losing more people due to pricing.” 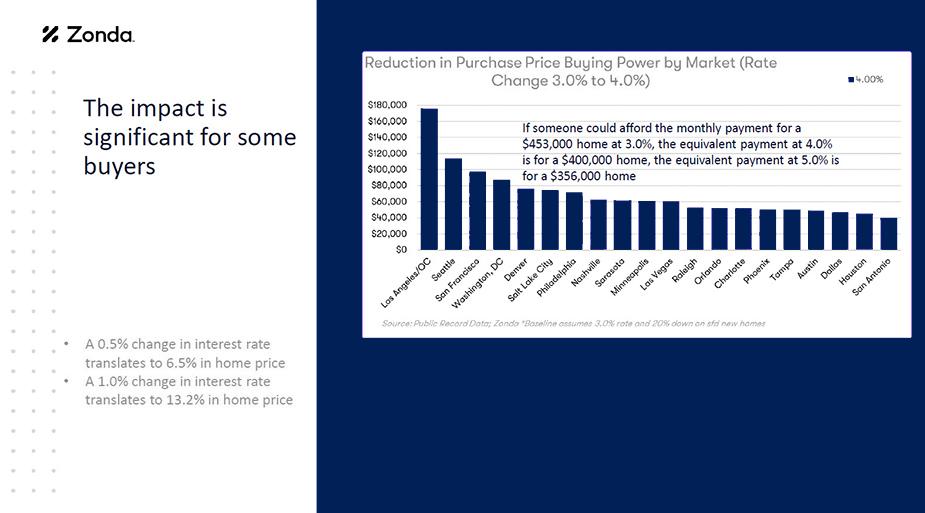 HOW BUILDERS ARE ADJUSTING

Many builders are planning to take action, including not selling to investors, moving into the condo market, and offering different levels of finishes.

Although it can be difficult — because it may mean working with cities to get zoning regulations changed — some builders plan to build more attached homes. (A large majority — 78% — of new homes currently being built are single-family detached homes. There are some markets where that percentage is much higher. For example, active projects in San Antonio are almost 100% detached, Austin is about 95%.)

However, given that research shows most homebuyers want single-family detached homes, some builders plan to continue to build them — but in higher density developments. There’s potential for increasing density by reducing yard sizes, for example. Zonda’s survey found that about 24% of homebuyers want a big back yard — but almost as many say they want a functional back yard that doesn’t have to be as big but where they can enjoy socializing.

About 13% of builders are planning to decrease the square footage of the homes they build. (Over 70% are not planning to change their homes’ square footage. And about 15% are going to increase it — probably those who cater to the higher end market.) 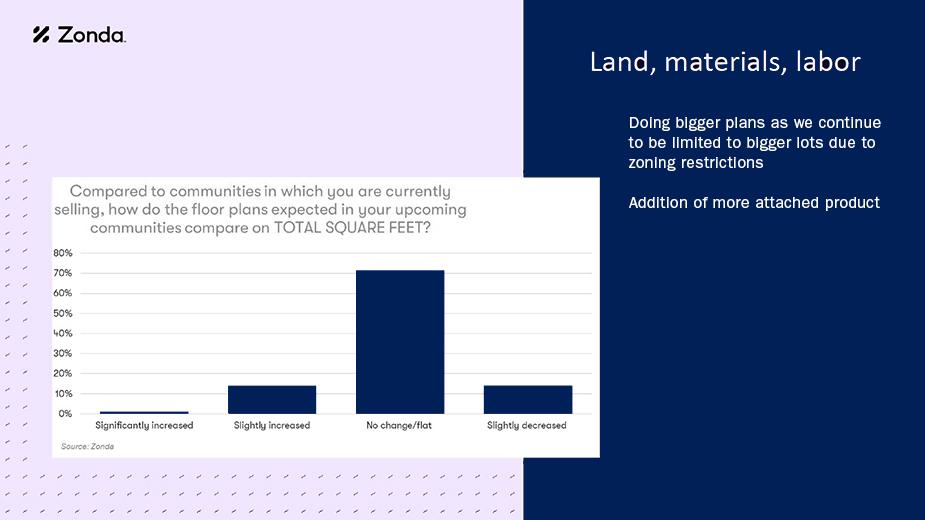 Another route some builders plan to take is to develop single-family detached home communities that include ADUs (Accessory Dwelling Units) so homeowners can qualify for mortgages using their anticipated rental income from their ADU.

As mortgage rates continue to impact the building industry, Builders FirstSource will continue to monitor the situation and share the information as it becomes available. Stay tuned for our upcoming market intelligence webinars, and visit your local stores to talk directly to our experts.